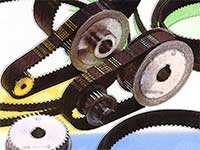 Timing belts can be divided into 3 groups:

For the first group of belts the dimensions are given in inches. 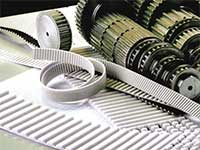 The second group of timing belts are: T5, T10, T20, AT5, AT10, AT20, ATK5, ATK10, 5M, 8M, 14M and double sided versions of those belts. Timing belts allow the synchronization of transmitted power due to their precise performance.They are available in endless and spliced versions (all lenghts for selected pitch).

The material and design of belts allow to build precise shafts that work quiet and stabilized.

Timing belts are used for drive and conveyor elements for heavy industry machines like: